Millipedes and centipedes are similar pests. Though they may be unusually repulsive, they are not a major threat to people or animals. A centipede can be easily distinguished from a millipede because it has fewer legs; specifically, one set for every segment of its body. Millipedes have two sets of legs for every segment, and when they move, their legs appear to be moving in a wave-like motion. A millipede’s legs are also shorter and, in general, a millipede cannot move very fast. A centipede, with its fewer legs, can travel considerably faster. Both centipedes and millipedes are generally hatched from eggs, but some varieties are born live. Some centipedes may live as long as six years.

Centipedes actually have the ability to bite, and are poisonous. The poison from their fangs, located behind the head, is used to kill insects, which are their primary food. To a human, a bite feels like that of a bee sting, and can be dangerous, especially if there is an allergic reaction in response to the bite. Children will be more sensitive to a centipede’s bite. Millipedes are not poisonous and do not have fangs, but they can emit an obnoxious fluid to defend themselves. Some varieties can spray this fluid several inches. The fluid can cause irritation to the skin in some people and should be removed right away. Additionally, it may take some scrubbing to get rid of the odor.

Millipedes feed on decaying plant matter and sometimes, living plant roots. Millipedes can damage those roots if there are too many of the pests in the soil. Some varieties are known to be especially bothersome to greenhouse plants. House centipedes are an indoor variety. They can move quickly and do not require the moisture that the other varieties need. Centipedes are beneficial to the control of other insects, which may be a good reason to keep them around. The most likely time of year to see centipedes in your home is in the spring or fall.

Control of centipedes and millipedes can usually be done by sealing cracks and crevices to prevent them from migrating into the house along with an exterior and interior pesticide treatment with low-toxicity that can help control centipedes, millipedes, and other perimeter invaders. 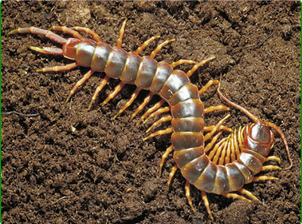 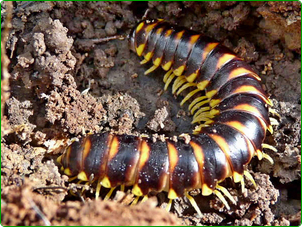